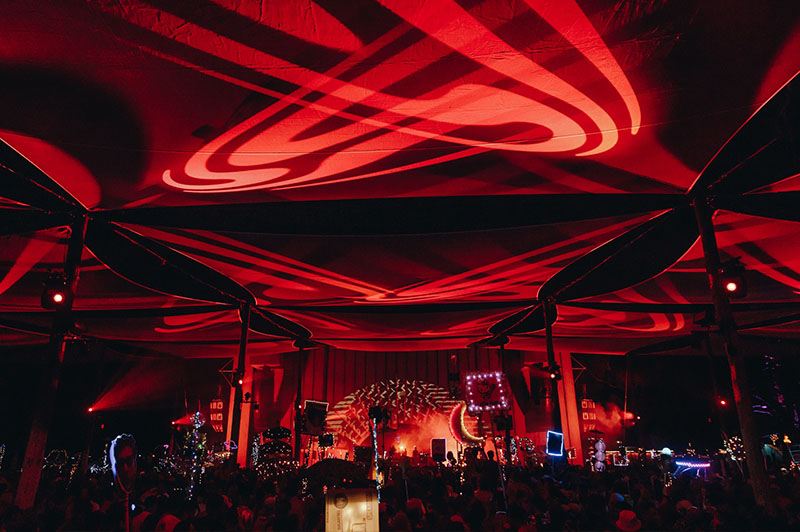 The Resident Advisor stage, this year, appeared to be built entirely from purple milk crates. DJ Spit mixing into Thinking of U by nickname elicited the most rapturous response from the crowd that day. There was a celebratory atmosphere in the air, as though the audience had come to the realisation that this was only the first of four days at Pitch. Floating Points’ set was equally spellbinding, as was Eris Drew going back-to-back with Octo Octa, Sam Alfred and Sherelle.

In previous years, publications had highlighted that the advertised art programme of the festival had been undercooked, if not completely absent. This year saw the festival host a varied display of installations. Aarti Jadu’s and Joli Boardman’s collaborative multimedia installation was a thoughtful and harmonic oasis, especially when illuminated at the end of night. Three pillars, each containing a speaker, were placed in a triangle formation. From them, the two artists broadcasted healing theories and raga music.

Every evening we were greeted with the spectacle of brilliant pink and orange sunsets catching on the craggy ranges of the Grampians. A patch of rain on Sunday led to the dissipation of dust from the air, to everyone’s delight. On the last day, a crowd slowly made its way over to Pitch One for the final performances. There, the action was in full swing before Jayda G took over with a joyous sequence of jazz and soul-infused house. Left smiling ear-to-ear, the festival crowd was then primed for Job Jobse to close the main stage. The producer certainly understood the assignment, delivering an uplifting tracklist of sing-a-long crowd favourites. Looking around, there were over 7,000 happy ravers. Truly, a sight to behold.