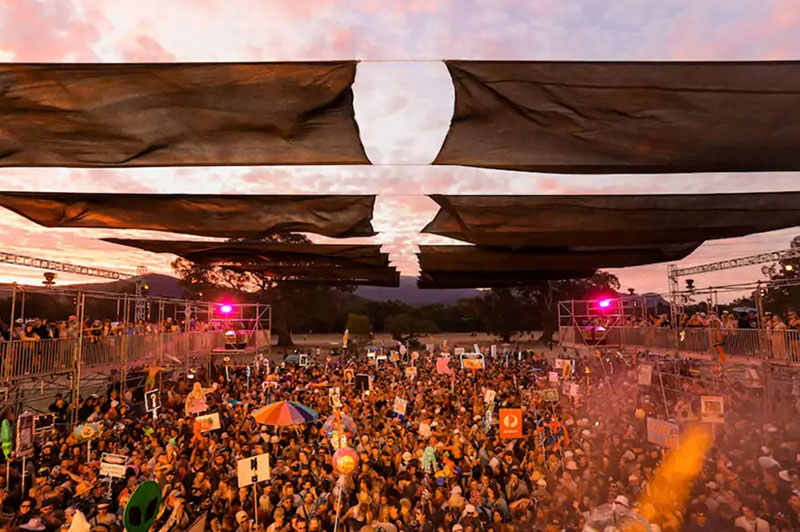 Out With The Same Old Line Ups: Pitch Showcases A New Age Of Australian Festivals

Pitch Music & Arts is a loud indicator of cultural and industry change of the ways in which the casual Australian music fan wants to engage with live music.

Two weekends ago, Pitch Music & Arts hosted their four day boutique festival in the foothills of The Grampian Plains. What occurred was magical, but also historic for contemporary Australian music. Thousands and thousands of festival punters entered the festival to witness international dance music pioneers back on Australian shores alongside an array of incredible, diverse local talent, for a music festival that didn’t appeal to the music festival trend which has existed across Australia over the last 10 years.

There has been many discussion behind closed doors over the highly repetitive line-ups on the Australian music festival circuit. How many times have we seen the same bands, the same local acts headlining every massive festival most years. Artists feel it, every editorial feels it and almost definitely festival goers feel it too. While there are many, significant reasons for this repetitiveness, the non-diversified structure of the music industry is often to blame.

There are a minimum amount of players that have the ability to shift the culture of Australian music. Triple J is an incredible, central promotional and discovery platform for local music and has developed some of Australia’s superpower international acts. It also serves as a platform for international artists to dominate Australian shores. By virtue of structure, this has led to homogenous lineups. Triple J culture has dominated the Australian music industry for many years and many would argue for better or for worse. That’s an argument for another day.

The internet has broken down the barriers to acknowledging the power of international dance music. Millions of people have access to viewing incredible DJ sets via a platform such as Boiler Room, TikTok and Instagram are acting as breeding grounds for artists to interact directly with their listeners globally.

Major streaming platforms are acknowledging the rising breed of dance music in  Australia, with faces such as Moktar, Pretty Girl and more leading Spotify’s new playlist Portal. Nina Las Vegas has curated a series of incredible mixes on Apple Music from the likes of Crescendoll, dj pgz and more.

Underground dance music is at its most visible and its communities are forming away from the historical figures that have dominated the Australian market for years.

Pitch Music & Arts is a taste of that. We do acknowledge of course that dance music festivals are not new and that doofs hold an extremely special place in our hearts. Festivals such as Hopkins Creek, Inner Varnika etc. are cornerstones of dance underground communities in Australia, yet in the past 5-10 years, rarely does an “underground” dance music festival reach this level of commercial and widespread success.

Pitch’s ability to capture this energy through its curation is superb. It mashes some of the biggest names in dance music with the local underground legends that have been spearheading dance music to the forefront of creativity in their individual cities. Artists like Crescendoll, dameeeela, dj pgz, jamesjamesjames, Memphis LK, Jennifer Loveless and DAWS, who would all normally play to a couple hundred people at a jam packed club night were provided the opportunity to showcase their craft to thousands of punters.

They traded headphones with heavy hitters including CC:DISCO!, Denis Sulta, DJ Seinfeld, Eris Drew & Octo Octa, FJAAK and Jayda G, to create a euphoric, wholesome and diverse showcase of dance music to a festival crowd that may not be as in touch with the tropes dance music as the aforementioned and heavily adored festivals.

The power of Pitch is that it is no longer a small doof that deeply invested punters from across Australia gather in a small, discrete way. Pitch is a loud indicator of cultural and industry change of the ways in which the casual Australian music fan wants to engage with live music.